Health Benefits Of Caffeine – Not Just A Pick Me Up March is Caffeine Awareness Month and given my well known penchant for everyone’s favourite 8-Carbon compound, I’m thrilled to once again be teaming up with the Canadian Beverage Association to produce some high quality educational content on caffeine.

For those who didn’t get that nerdy reference, don’t worry because it bears zero relevance to the information in today’s post – but I still had to do it!

For your personal reference, caffeine’s chemical structure has 8 Carbon molecules ( hence the 8C – those grey circles in the image below). 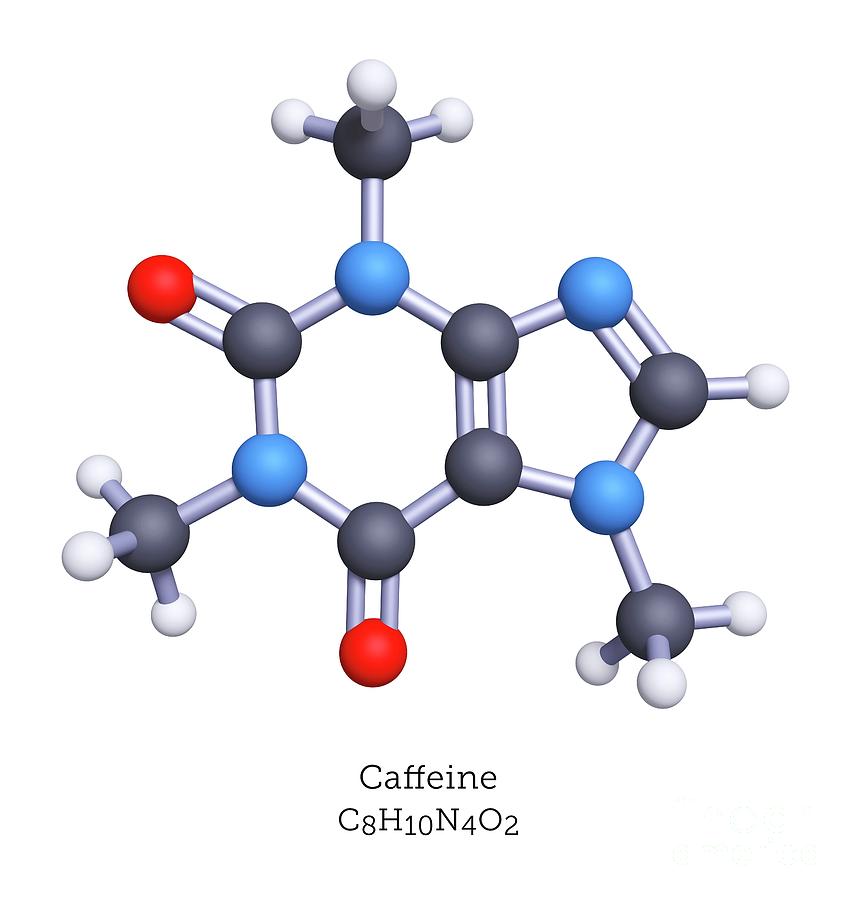 This is the least interesting thing you will learn today, I promise.

Now my regularly readers will know that I’ve written regularly and extensively on all things caffeine and so my mission with today’s article is to put all of the most relevant and hard hitting facts all in one place, and take it to the next level with some new scientific insights related to caffeine intake and human health.

Before we get to that though, let’s review the basics.

An Intro To Caffeine In Canada

I want to start by quickly setting the stage by establishing a few important parameters:

There is obviously a bit more nuance to each of these points, but I’ve covered that in previous blogs which you can easily access here.

Now that we’ve established a level playing field, let’s take a peak into how caffeine works and some of the benefits that the moderate consumption of caffeine ( as defined in point 2 above) is associated with.

Caffeine Works Via The Adenosine Receptors

I’m going to keep this brief, but I think it’s important to remind everyone that caffeine’s most salient physiological function takes place in the central nervous system (CNS) where it temporarily blocks what are known as adenosine receptors.

Adenosine receptors play an important roll in essentially slowing and relaxing the body, which is why some people who consume caffeine too close to bedtime ( as much as 6 hours after consumption) may have interrupted sleep.

It’s for this reason that caffeine is scientifically considered a stimulant – because it temporarily blocks the systems that slow us down.

But there is a whole lot of utility in such an effect, which are going to get to next.

As someone who plays soccer and regularly engages in physical activity, I can honestly say the performance aspects of caffeine have me intrigued.

It’s not coincidence that the Gatorade Sports Science Institute has a robust article outlining all of the positive effects it has on sports performance.

What’s important to know about caffeine which relates both to physical performance and cognitive performance (to be discussed next) is that it tends to operate via what is known as the Yerkes-Dodson Law. This law essentially says that up until a certain intake level you enjoy a benefit of something stimulating, but beyond that level it may detract from your performance.

This is why the guideline is not to have “all the caffeine you want” before a workout or day to day.

If you’d like to learn more about how much caffeine different foods contain, please do review my comprehensive article on that subject.

On to cognitive performance, because caffeine helps with that too!

This is something that you probably didn’t need me to tell you, but guess what – caffeine helps you “wake up” , which when presented in a scientific way basically means that it fights back against the lessened alertness/attention that people experience when they are under slept, fatigued, etc.

When used in this way, between 40-300 mg is effective although individual variation to caffeine response must be taken into account.

For example, a person who isn’t sensitive to caffeine and is very tired may need closer to the higher end of that spectrum, where the reverse may be true for someone in the opposite position.

But since you probably already knew that, let’s talk about something you might not have been aware of.

You heard that right.

A review of the best available observational studies on caffeine intake at the population level had some very intriguing findings.

Those who consumed caffeine were protected against:

Now while we cannot draw firm conclusions from observational evidence alone, it certainly does presently logically on some level that a stimulatory compound like caffeine could have beneficial effects on the conditions listed above.

But there is another layer to this discussion which takes into consideration that the most commonly consumed caffeine-containing food (coffee) is also one of the richest source of dietary antioxidants in our whole food system.

Coffee Intake May Protect Against Some Cancers

This is a big claim to make, isn’t it?

And yet I can’t deny that a robust review of the best available evidence suggests that coffee intake may be protective against a number of different cancers as well as type 2 diabetes.

Now more research will need to be done in order to draw firm conclusions in this area, but the initial insights are promising.

I do, however, want to leave you with an even more promising scientific insight.

When I more closely examined the different dietary components associated with the risk reductions of different types of cancers, one really fascinating finding regarding coffee intake and liver cancer jumped out at me.

According to a comprehensive report by the American Institute Of Cancer Research, coffee is the dietary component that is most strongly associated with a reduction of liver cancer risk.

(The same organization identified tea intake as protective against bladder cancer as well!)

Such a powerful finding, especially given that liver cancer is the 6th most common cancer in North America and a leading cause of cancer-related death globally.

Quite a statistic, isn’t it?

Certainly, something to think about before giving in to rhetoric that caffeine and caffeine-containing foods are not meant to be consumed – even if yes, of course, we must be mindful and moderate about their consumption.

Check Out My Appearance On The Eat Cake Pod!